Computer Designs Are Not Inclusive of Women 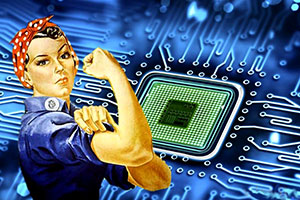 Computer Designs Are Not Inclusive of Women

The National Science Foundation (NSF) has put more than $300,000 in projects that set out to build a “feminist theory” for human-computer interaction (HCI) in order to make the area of computing more sensitive to gender.

A scientist of Drexel University has put forth a view that the meager number of women in computer sciences is the result of the fact males make computers.

A grant for this project explains that the researcher’s aim is to establish a theory that would influence HCI practices in design, so that more egalitarian designs incorporate the values of all users. She hopes that her feminist HCI theory will bridge the gap that pushes women out of computing fields. She also points out the questionability of current designs when they are evaluated in the feminist theory. Feminist scholars maintain that women are further put off from building a career in computing because there are so few women in that field now. Moreover, the technologies and designs, they argue, are made by men and for them.

This project also looks into “gender and technical identities” and the hypothesis that computer design contributes to the alienation of women.

The project grant adds that the Principal Investigator states that design practices don’t just exclude women, they alienate them. Her approach to this problematics is to draw on learning sciences that haven’t previously been connected – human-computer interaction, gender studies in science and technology and the results of a longitudinal ethnographic study that investigates the technical identity of girls and how that identity informs their career choices.

The goal of the project is to instruct teenage female students to design technologies in line with their identity as females.

The text of the grant continues that this teaching is expected to find out what the girls need and thus provide the informing material for the researcher to outline gender-sensitive computing design that promotes equality in access. By connecting previously unrelated sciences, the project will redefine the problem of unequal representation of men and women in computing and offer better design and evaluation practices in HCI.

Other aspects the project wants to explore is how girls build their identities in relation to gender and technology, what attracts them to careers in technology and how technology items obtain symbolic gender.

It was in 2013 that the project started and studies will continue through 2019. The government, or more precisely, taxpayers have already paid $345,019.

Jennifer Rode, a teacher at Drexel University, is the Principal Investigator of the project. She is also in charge of the “rainbow lab”, directed to fight against gender inequalities and encourage feminine expression in the field of computer sciences.